Would you like to be part of the emerging landscape of film, but would like the assurance of working with a team of talented creators with a proven track record? Now you can!

Burning Bulb Publishing, founded in 2008 and publisher of over 100 books and audio recordings, is launching Burning Bulb Productions, a filmmaking division aimed at developing micro-budget pictures with incredible story-lines that can be made via our network of filmmakers and studios.

Project 1: Adult Comedy – A ‘Benny Hill’-like comedy that follows a misunderstood insurance adjuster as he struggles through a hard day on the job working claims and keeping aroused customers happy.

Project 2: Horror/Suspense – A paralegal encounters more than she bargains for when her car gets impounded and she finds herself stranded in a backwoods town ran by a bloodthirsty cult.

Project 3: Thriller – A prosecutor seeks vigilante justice against the owner of a foster care home and his associates when the legal system ignores numerous charges against him.

How can you help?

We are looking to acquire $15,000 per picture ($45,000 total) to fully produce all three films.  Each will be ‘green-lighted’ once $10,000 is secured as Burning Bulb Publishing (Burning Bulb Productions) will match each project with a $5,000 grant once the base is secured.

Anyone wishing to be a Producer in one of these projects will receive a 20% return on their investment above their principal contribution.

How does this work?

During pre-production, the investor/producer will finance part or all of a given picture up to $15,000 per project. This funding will be collected one month prior to shooting the film.

Afterward, the investor will receive 20% of their investment back once the movie is complete, and the full 100% of their principal upon a funded distribution deal or completion of a theatrical tour.  In other words, 120% back.

Each picture will take between  9 months and 18 months to complete, with full repayment plus bonus within 24 months.

How are the credits structured?

Could I receive points instead of a flat 20% bonus?

We plan to value each project at $100,000 upon completion.  This is because there will be A LOT of additional behind-the-scenes work (and deferred expenses) from the studios, cast, crew and VFX teams that will be adding value far and above the initial seed money required here.

Anyone fully funding a film can request points instead of the flat bonus based on $1,000 equaling 1 percentage point (1%) of the picture’s 100,000 end value.  In other words, if you fully fund a picture for $15,000, you can opt to receive 15% of the net proceeds of the film on all deals.   Other ‘points’ are reserved as deferments to the various actors and crews we are working with to pay them beyond the core operational needs we are seeking here.

Should you wish to be paid in ownership percentage points, these points are in lieu of a flat buyout and unlike a guaranteed principal return with 20% ROI bonus proposed in the other structure, no guarantee is made on a picture’s performance and or if points will earn more.

I am in!  How do I contribute or learn more?

If you would like to be a producer on one of these projects or wish to review the scripts, learn more about the studios behind each project, etc., please complete the form below.  Be advised that a non-disclosure agreement (NDA) is required upon receipt of any confidential information.

THE HAGS OF BLACK COUNTY by MICHELLE BOWSER now available on audiobook! 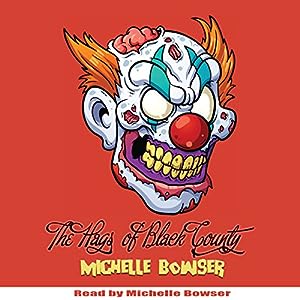 When a construction Company needs to bury a pipeline through its ludicrous hills and valleys, a twisted charm goes to work and every aspect of already bizarre Black County life takes a gory turn for the hysterical. Take a preposterous trip along with its citizens, both native and new, through escapades such as the Hag parade, the grand opening of Madame Skunk’s House of Ill Repute, the demolition derby riot, and the rabid zombie clown apocalypse.

Download The Hags of Black County today at amazon or audible.