RISE OF THE DEAD – The Zombie Anthology You’ve Been Waiting For!

From John Russo, co-author of Night of the Living Dead™:

“By now almost everyone knows that the concept of the modern flesh-eating zombie originated in the sixties with Night of the Living Dead™. That’s why I think that this anthology of short stories paying homage to that fact is a wonderful idea. When I was asked to write such a story, I was told that each and every story in the book would have to take place in or around the time, in 1968, when the horror classic that I co-authored took place…

Perhaps, for you, dear reader, some of the stories you will read in these pages will take their place as some of your very own favorites. Please step back with me into the 1960’s – a time of peaceniks, rednecks and unspeakable zombie horror!!”

RISE OF THE DEAD

A collection of seventeen stories from masters of pen and screen, featuring:

– The First One by John Russo

– The Last Ministry by E.L. Stice

– The South Will Rise Again by Andy Rausch

– The Protest by R.D. Riley

– Peace in Peaces by Zakary McGaha

– The Commune by David J. Fairhead

– The Morning After by Douglas Brode

(includes FREE shipping to US addresses)

THE FALL OF TOMORROW by DAVID J. FAIRHEAD now available on amazon!

Burning Bulb Publishing is pleased to announce that THE FALL OF TOMORROW – the breakout horror novel by DAVID J. FAIRHEAD – is now available on amazon!

“David Fairhead writes compelling stories that offer very human characters and very inhuman monsters. There is no subtlety in Fairhead’s imagination – he is simply dying to scare the hell out of you.”  – Nelson W Pyles – author of DEMONS, DOLLS AND MILKSHAKES

Hopelessness… How do you protect your loved ones when Hell itself opens its insidious mouth?

Horror… Nightmarish Creatures invade your world and there is nowhere to hide.

Blood… How long can you hold out before they come for you?

Pain… Where do you run to avoid being eaten alive by monsters with a voracious appetite for your flesh?

Screams… While you selfishly run for your own life.

Questions… Who is to blame? Where did they come from? How many people survived…and how does the human race find the means to fight back?

THE FALL OF TOMORROW is man’s last tale of desperation told by those that are striving to salvage some hope against a ravenous bastion of evil beasts bent on ruling our world. 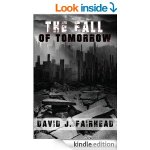 John D. decided to read VEGAN ZOMBIE APOCALYPSE by Wol-vriey in one setting and his eyes popped out of his head! OMG!

Burning Bulb Publishing cannot be held responsible for any physical or psychological damage that reading our books may cause.

Dare to read VEGAN ZOMBIE APOCALYPSE for yourself? Check it out here.